If there are live recordings that will not say much more than their studio counterparts, other performances have the merit to change the game. When Sons of Apollo first appeared two years ago, no one was left with a few laconic comments in the purest jaded style: “Another supergroup!”, “Another Mike Portnoy’s band!”, “Another Dream Theater clone”… However, the former drummer of the american band, supported by Derek Sherinian (Black Counbry Communion, Planet X), Jeff Scott Soto (Talisman), Ron “Bumblefoot” Thal (ex Guns n’ Roses) and Billy Sheehan (M. Big, The Winery Dogs) had proposed a solid first album soberly entitled Psychotic Symphony. The following tour will be a festive one, culminating in the performance recorded here at the old Roman Theatre in Plovdiv, Bulgaria, with a large orchestra and choir. If the band’s only album could not be enough for a setlist of nearly three hours, the discography of our friends would largely give enough to satisfy the audience. And some other tracks will be cheerfully picked from Pink Floyd (“Comfortably Numb“), Queen (“Show Must Go On“) or Led Zeppelin (“Kashmir“). Delivered with its video redording in a deluxe 3CD + DVD + Blu-ray box that will delight fans, it must be said that the five musicians are not there to laugh. The tracks follow one another around great solos, play on the Dream Theater side (“Just Let Me Breathe“, “Hell’s Kitchen“, “Line in the Sands“) and break the house with the eleven minutes of “Opus Maximus“. And the orchestra? The album covers will allow you to appreciate his interventions with mastered pieces where Soto has nothing to be ashamed of despite the repertoire of Ozzy, Freddie or Steven Tyler. The overall picture is pleasing. Heavy to digest but powerful live music lovers will find what they are looking for. And finally, this concert will stay a great testimony in which the musicians, far from any ego trip, give the best of themselves.

SONS OF APOLLO – LIVE WITH THE PLODIV PSYCHOTIC SYMPHONY 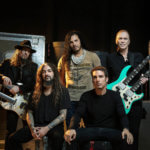